Unfortunately, we have had to cancel tomorrow's (22 May) Jay Treaty Conference. We are very sorry for any inconvenience. We will inform you of any future scheduling.

Thank you for your understanding. If you have any questions, please contact Kate Buchanan at: kbuchanan@cascadia.com.


The conference will not longer be starting on Sunday, 21 May and will only be taking place 22 May 2017.

Please contact Kate Buchanan at kbuchanan@cascadia.com if you have any questions!
Posted by Author at 10:03 AM 1 comment: 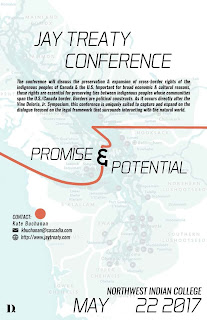 Exciting Jay Treaty Developments in 2016 and Beyond!

On Saturday, July 9th, U.S. immigration attorney Greg Boos chaired a panel on An Indigenous Right of Free Passage at the Border: The Jay Treaty’s Promise & Potential at 11th Annual Vine Deloria Jr. Symposium at the Northwest Indian College in Bellingham, WA. Vine Deloria was an internationally known aboriginal activist and educator. Perhaps his most famous work is Custer Died for Your Sins, but he is author of several other important works as well.

Meanwhile, Greg Boos is chairing a steering committee to organize a two-day national conference on the Jay Treaty in the spring of 2017. The conference will be co-hosted by Western Washington University and Northwest Indian College.

The Seattle Journal of Environmental Law (SJEL) article written by attorneys Greg Boos, Greg McLawsen, and Heather Fathali entitled Canadian Indians, Inuit, Métis, and Métis: An Exploration of the Unparalleled Rights Enjoyed by American Indians Born in Canada to Freely Access the United States was used as part of the Vine Deloria Jr. Symposium materials. It will also be used as part of the materials for the spring conference. In a recent law review article entitled The Indigenous as Alien, UC Berkeley School of Law Professor Leti Volp refers to the SJEL article as the “definitive explanation of Jay Treaty rights”.

On the legislative side, Washington State Representatives Susan DelBene and Derek Kilmer have introduced a bill to expand the base qualification of those eligible for classification as an American Indian born in Canada under INA 289. Simultaneously, the Canadian Senate issued a report calling for appointment of a special representative to find solutions to address border crossing challenges for First Nations communities that straddle Canada and the United States or that are close to the border.

Finally, the Jay Treaty’s aboriginal right of free border passage has become the subject of a piece of art by Richard Linkletter on display at Winnipeg’s Plug In Institute of Contemporary Art.
Posted by Author at 1:47 PM 2 comments:

Annual Native Parade Encounters Delay at Border- Could a Lack of Jay Treaty Reciprocity by Canada be to Blame?

Members of the Indian Defense League of America encountered delays in their annual cross-border parade, in celebration of the Jay Treaty right of native peoples to freely pass the U.S./Canada border.

“The U.S. and Canadian countries put a border through the middle of our territory, and today is the day we exercise the right to remind them that we have (the freedom) to pass through our territory,” said Jill Claus of the Tuscarora Nation.

Read the full article at: http://www.niagarafallsreview.ca/2015/07/18/annual-native-parade-encounters-delay-at-border

Although the delays were reportedly due to heightened security for the Pan American Games, it may have also had something to do with the fact that Canada never ratified the Jay Treaty. As it currently stands, U.S.-born Indians are not extended a reciprocal right of entry to Canada under the Jay Treaty. While Canadian courts have recognized and protected an aboriginal right to freely pass the border, the right is based on a complex,10-factor test for determining whether aboriginal rights exist in a particular case; it is difficult to assert and not a practical means for native peoples in the U.S. to access Canada.

Native communities have existed in North America long before there was a border to cross, and native communities continue exist on both sides of the border. Without some form of Jay Treaty reciprocity by Canada, native communities will continue to be hindered in their attempts to maintain cultural, social, business, and family ties with their cross-border counterparts.

What do the Jay Treaty and the Iran Deal Have in Common?

Obama Hopes History Will Prove Him Right on Iran

In a thought-provoking article by George E. Condon Jr., White House correspondent for National Journal, the author points out that all the way back to our Founding Fathers, when Presidents have made controversial agreements with foreign governments in the face of harsh public criticism, those agreements have typically ended up on the right side of history; with hindsight vindicating their decisions and proving the critics wrong:

“The reality is that almost every president who has reached a major agreement with a U.S. foe has been viciously attacked, with treaty foes warning of dire consequences. But even as he is being battered over the Iran deal, Obama can take some solace from the fact all of those presidents were rewarded by sticking with the deal and ignoring popular disdain and stinging criticisms.

Some of the venom was captured earlier this year in "A Brief History of Hating Treaties," by reporter David H. Montgomery of the St. Paul Pioneer Press. He recalled the criticism of the Jay Treaty in 1796 that dealt with the issues left over from the Revolutionary War. George Washington was too revered a figure to assail, so the critics went after Washington's chief negotiator, John Jay. Montgomery cited one newspaper editor who wrote sentiments about Jay not too far away from today's Republican attitudes toward Obama, referring to Jay as "the arch traitor—seize him, drown him, burn him, flay him alive."

Seven years later, Thomas Jefferson was viciously attacked for agreeing to the Louisiana Purchase for $15 million. Then there was the 1842 Webster-Ashburton Treaty, again with Britain, which one congressman said was a collection of "errors, mistakes, blunders, concessions, explanations, apologies, losses, and mortifications." But history showed both Jay and Webster to be good treaties for the United States, and Jefferson was vindicated for doubling the size of the United States.”

Read the full article at:

Who Puts the "Jay" in Jay Treaty?

Chief negotiator and namesake of the Jay Treaty, John Jay, is a founding father most Americans know very little about; at least when compared to his peers such as Washington and Jefferson. However, his influence was vast and lasting; reaching all branches of government, and nations worldwide:

"Jay was one of three contributors to the Federalist Papers, which helped define American government. He was president of the wartime Continental Congress, then served as secretary of foreign affairs, precursor to secretary of state, after the Revolutionary War ended. He was an essential diplomat whose peace negotiations with England, leading to the Treaty of Paris, vastly expanded U.S. territory.

For his accomplishments heading a network of informants during the revolution, actions that helped inspire James Fenimore Cooper's novel "The Spy," the CIA's website calls Jay "the first national-level American counterintelligence chief." He also helped write the New York Constitution, was a founder of the New York Manumission Society and as governor signed legislation that phased out slavery in the state (Jay himself owned slaves).

The founders bickered colorfully among themselves, but they agreed on the virtues of Jay. Noting his centrality in the talks with England, John Adams praised him as "of more importance than any of the rest of us." Alexander Hamilton turned to Jay first when conceiving the Federalist Papers, and George Washington thought so much of him that when he was forming his original Cabinet, he offered the first position — any position — to Jay, who chose the Supreme Court."